New Zealand has numerous political issues that do not have obvious or easy solutions – housing and covid come to mind.

But there is one problem that can be easily and simply fixed in a way that should please just about everyone.  That problem is the MMP threshold and the wasted votes that result.

Many people want to support a minor party, AND want to influence which major part or parties will get to form a government.  At present they cannot do both.  A vote for a minor party can easily have no effect at all.

The solution comes from realising that the problem  is not so much about the existence or level of the threshold.    The problem is that if you vote for a party that gets neither 5% or an electorate seat,  your vote is wasted.  Nobody likes wasting their vote,  and so the threshold distorts voter behaviour.

The solution comes from applying the same method that we use in many other situations where we want every person to make a choice, and to still get something if their preferred choice is not available.  Yes, you’re onto it.  The solution is to give each voter a second choice.  “Choose the party you prefer, but declare a second choice in case your preferred option is not available”.

Applying this idea to an MMP election is much easier than you might at first think.   First modify the voting paper by adding a second column to the party voting section.    Explain to voters that they can give their first choice to any party.  If they think that this party might not pass one or other of the thresholds, they can make a second choice in the other column.  And if they want to be sure that their vote is not wasted, they make sure that one of their choices is for a party certain to pass a threshold.

At present, perhaps only the two major parties are really safe bets to pass the threshold.  But other parties are becoming established.  But each voter is free to choose who to vote for.

The voting paper can be very fault tolerant.  As long as one or other column has just one tick, the intention is clear.  The other column will normally show the other choice, but can be blank or with multiple ticks or whatever.

Vote counting is just a little more complex.  Usually it becomes clear early on which parties have passed the threshold.   Each polling place can prepare its own result table.  Results tables by electorate, region, etc are easily created by grouping the results as required.

From this point on the allocation of seats in parliament proceeds exactly as now.

What would be the result  of this modest change to MMP elections?  All the anxiety about vote-wasting is gone.  Every voter can both choose their preferred party, and be sure that whatever happens they can have a vote that counts.  The result is that much more proportional.

There is no problem if either threshold is abolished or changed. If all the thresholds were to be abolished there’d be no need for the second choice.

You can read about this idea at www.twochoicemmp.wordpress.com.

Another recent article describing this idea can be found at

If only other political problems were as easy to solve as this one.

This solution removes the serious wasted-votes problem that distorts voter behaviour and is often complained about, while retaining the 5% threshold that the major parties seem to place importance on. I am hopeful that it might be a practical, minor and importantly widely acceptable solution. 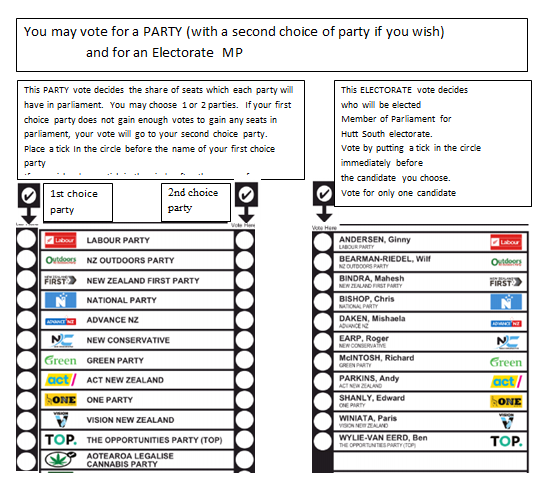 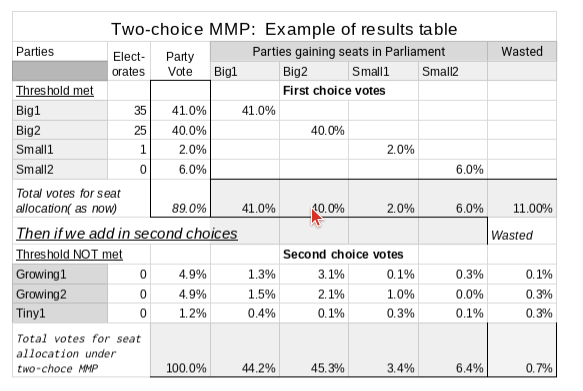 The menu at the top will take you to other pages.

Then there is the ‘Dual Level Voting’name

Latest summary: Why waste 5-8% of votes?